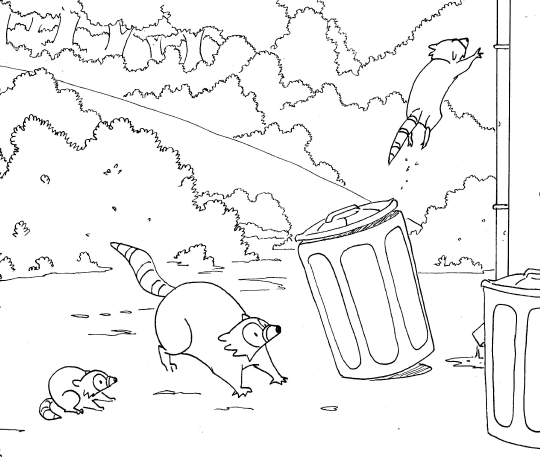 As more people start to read Raccoon Rescue, the more compliments I receive about its illustrations’ ability to draw the reader into the story. Credit for connecting with artist Christian Barratt belongs with my publishing mentor, Aulexic’s Rebecca Laffar-Smith, and I’m very pleased to offer an exclusive interview!

Christian is a musician, illustrator and scriptwriter from Perth, Western Australia. He has produced his own web comic, written and produced film scores, musicals and original songs, and his most recent film script was shortlisted in the top 20% in its category at the 2017 Austin Film Festival. In the daytime he works as a children’s performer and healthcare facilitator. Raccoon Rescue marks his second foray into book illustrating.

In this post, he talks about what drives him to draw, the work that goes into an illustration (hint: it’s not just the drawing), and the critical challenge that made Raccoon Rescue fun for him to work on:

CM: What’s your artistic background, and how did you come to illustrate children’s books?

CB: I’ve been drawing comics since I was little. From early on I adored the way pictures could tell a story, pull you into worlds that there was no other way to get to. Even just down to how the world looked from a specific perspective, like that of a bug or a giant or someone at school or in space. I loved how the world changed depending on who was looking at it.

As soon as I learned I could draw all those worlds and perspectives, I filled more paper than my parents could give me. Eventually that led me to do visual arts in high school and as part of my university study. I produced my own online comic for a while in 2006/07 called Sam & Sam, and I illustrated my first kids’ book for local writer, Michelle Dunn, in 2011 called Bits About Boarding School.

CB: I enjoy most parts of the process. I love finding the characters look by drawing them over and over til they move just right and I feel like I know them. I love researching people, animals and locations for visual reference and inspiration, picking and choosing the types of brick and hair and clouds I want to fill my illustrations with. And I love playing with camera angles, composition and pacing, maximising the storytelling impact of each illustration to lead the reader’s eye and establish a visual vocabulary across images.

My favourite aspect of illustration would probably be laying out my design and story ‘pieces’ and playing with composition to try to tell the best story with the picture. That’s where all my efforts in the other areas come together and make the illustration work.

And I enjoy working on almost anything if I get input into the design of the characters in some way. I definitely get excited about dragons and dinosaurs and robots and time travel, but I could have a great time drawing a tin can if I got to design how we saw her, how she moved, her weight and shape in the world she inhabits. That ‘creating’ part of drawing is always interesting to me.

CM: What made you decide to take on Raccoon Rescue as an illustration project?

CB: Half of my drawing practice on any given week is sketching animals. They’re just so much fun to animate, and the internet is awash with funny, strange and dynamic photos of them to get reference or concepts from. I think the symmetry of animals is very visually pleasing, likewise how their shape and proportions are often caricatures of our own. And raccoons are right up there in my top animals to draw. Their clever brains and dexterous paws make them so human-like and they’re always bounding or twisting or climbing in interesting ways.

When this story came along about a human vs raccoon encounter I thought it was a great chance to play with my favourite things about drawing raccoons. And maybe use that to help portray the message of giving raccoons respect as fellow creatures in the world.

CM:  Raccoons aren’t indigenous to Australia, but I loved the way you brought the characters to life. In general, how do you overcome challenges with illustrating?

CB: Thanks so much, I was thrilled when I landed on a raccoon design I really connected with. And the funny thing is that although raccoons aren’t native to Australia, they’re still one of the animals I draw the most. I think it’s the novelty of not having access to them any other way. I almost never draw spiders or sharks or crocodiles or kangaroos, animals which I know a lot about and have seen in zoos or the wild.

And there are definitely challenges that come up in every project. I actually wonder if I would accept any project where I didn’t foresee some kind of challenge in it. For instance, in Raccoon Rescue I had to draw entire environments based in a country I’ve never been to. It’s one thing to use reference to draw animals or people, it’s another thing to try to capture the scope and scale of a type of location you’ve never visited.

But as ever with a challenge, I just try to get as educated on the subject as I can. That way I can get a feel for what I could love about that unknown place or thing that I have to draw, and then once I feel connected to a place I can rely on my instincts and form a ‘visual opinion’ of it. That way, even if it’s not entirely accurate to real life, it will still feel genuine and true because I’m celebrating it in my own way. So I’d say my overcoming challenges just means expanding my perspective until the difficulty becomes an opportunity.

CM: What’s next — any current projects you can talk about, or upcoming ones?

CB: Well, I’m a writer as well, so I’m currently working on a few children’s books to write and illustrate. They’re in early design stages at this point, but I’m looking forward to doing all those fun illustrator’s processes based off my own words. I’ve written a lot of my own comics, but book illustration has some different parameters, so I’m eager to continue to explore them. Plus I love the collaboration of working with an author, so I’m looking forward to ‘collaborating with myself’ to see if my writing and drawing halves can do each other justice in book form.

Find Christian on Instagram for more of his excellent art, and meanwhile if you haven’t yet gotten your copy of Raccoon Rescue, get it here!