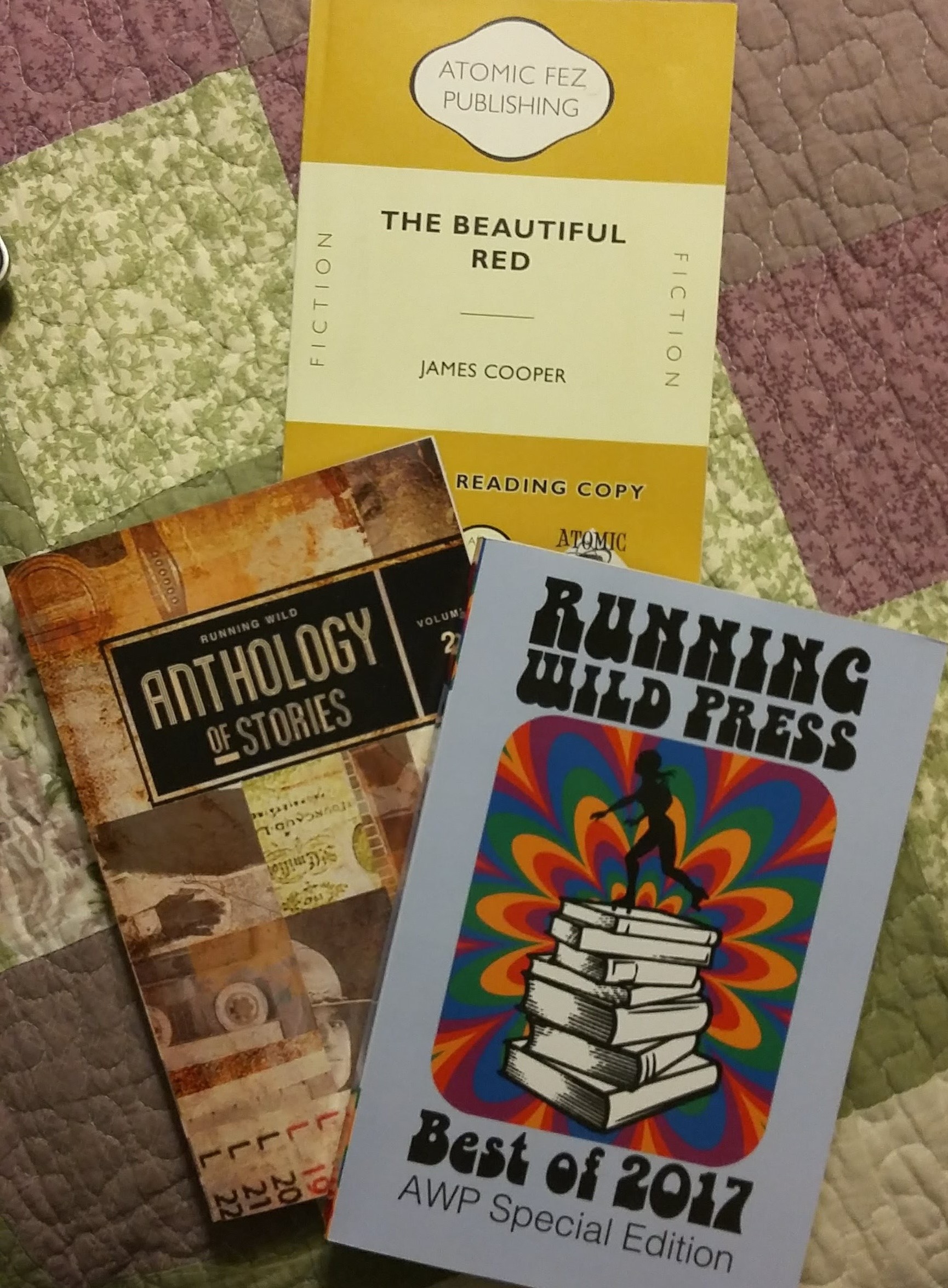 I had a little bit of a rough month. Early on I was struggling with flagging energy, anxiety, basically all symptoms I only experience when I eat foods to which I’m sensitive — grains in particular, except I wasn’t eating grains. I had, however, reintroduced nightshades into my diet.

Long story short, once I realized what was going on, I returned to the paleo autoimmune protocol diet I’ve followed for about a year, which is really tough (and the reason why I’d reintroduced more variety), but is what keeps me in equilibrium. Waiting for that to return, though, I had limited energy. As a result, I stuck mainly to short stories.

Running Wild Press, which published my novella in its first novella anthology, doesn’t adhere to genres. As a result, there’s something for everyone in this collection, no matter what you normally read. It was hard for me to pick a favorite; all the stories were good, deep, thought-provoking reads. Among my personal highlights:

Several of the stories deal with the liminal space between grief and life afterward. “Just Be,” “Undaunted,” “Seawall,” and “Life After Breath” all feature characters with varying ways of coping, while “Stolen Memories” is told from the point of view of an old man in the depths of Alzheimer’s disease, his own kind of grief.

Other standouts: “How to Serve Carnivorous Plants,” “Justice,” and “Last Memory,” largely because of their horror foundations, which as you know are near and dear to my heart!

The 11 stories in this collection are, like in other anthologies, not confined to genre. (Disclosure: my novella “Sodom and Gomorrah on a Saturday Night” was printed in this book as well as in the original anthology.)

They’re also a good balance of light and dark. In thinking about it, if this book were going to have a theme, it would be that all the stories seem to feature people who are trying to improve themselves. Whether they’re unloading frenemies and other regrets, moving house, escaping their pasts, or seeking to connect to better pasts to forge new futures (as Dwight Wilson’s enslaved African ancestors are depicted doing), these stories are most of all hopeful.

My husband somehow scored an advance reader copy (ARC) of British author James Cooper‘s unusual collection of creepy short stories. I say “unusual” because it gets pretty meta in places, and includes some microfiction, which I don’t see a lot of in collections.

Other stories in the collection start strong but end less satisfactorily, and the more “meta” type stories — particularly “We Are the Pigs” (in which the author appears to argue with himself), “The Hack,” and “Albion” — end up feeling self-conscious.

Still, meta makes you think; “The Hack”’s narrator observes: “… the creative process was a noisy, chaotic, and infinitely complex affair; that our generation, spoiled by forgiving cursors, predictive texts, and on-screen auto-corrections, had overlooked those facts in its headlong rush for speed and utility.”

I have to call out Maurice Broaddus’ “The Ache of Home” as an online standalone I also read during this month. Published in Uncanny Magazine, the story tightly covers many social issues: street harassment to start, racism and classism, gentrification and hunger, including the cutting assumptions which many white people make about black people and their neighborhoods.

In this new take on an old legend — read the story to see which one — food is a metaphor for life and living, contrasting the sustainability of solutions to a food desert in modern-day community conflicts. In this story are shades of the Seneca Village community lost to the development of New York City’s Central Park, as well as the affordable-housing debate currently ongoing in many cities including my own.

What did you read in March? Do you like to read short stories?

One thought on “March reads: Keeping it short”