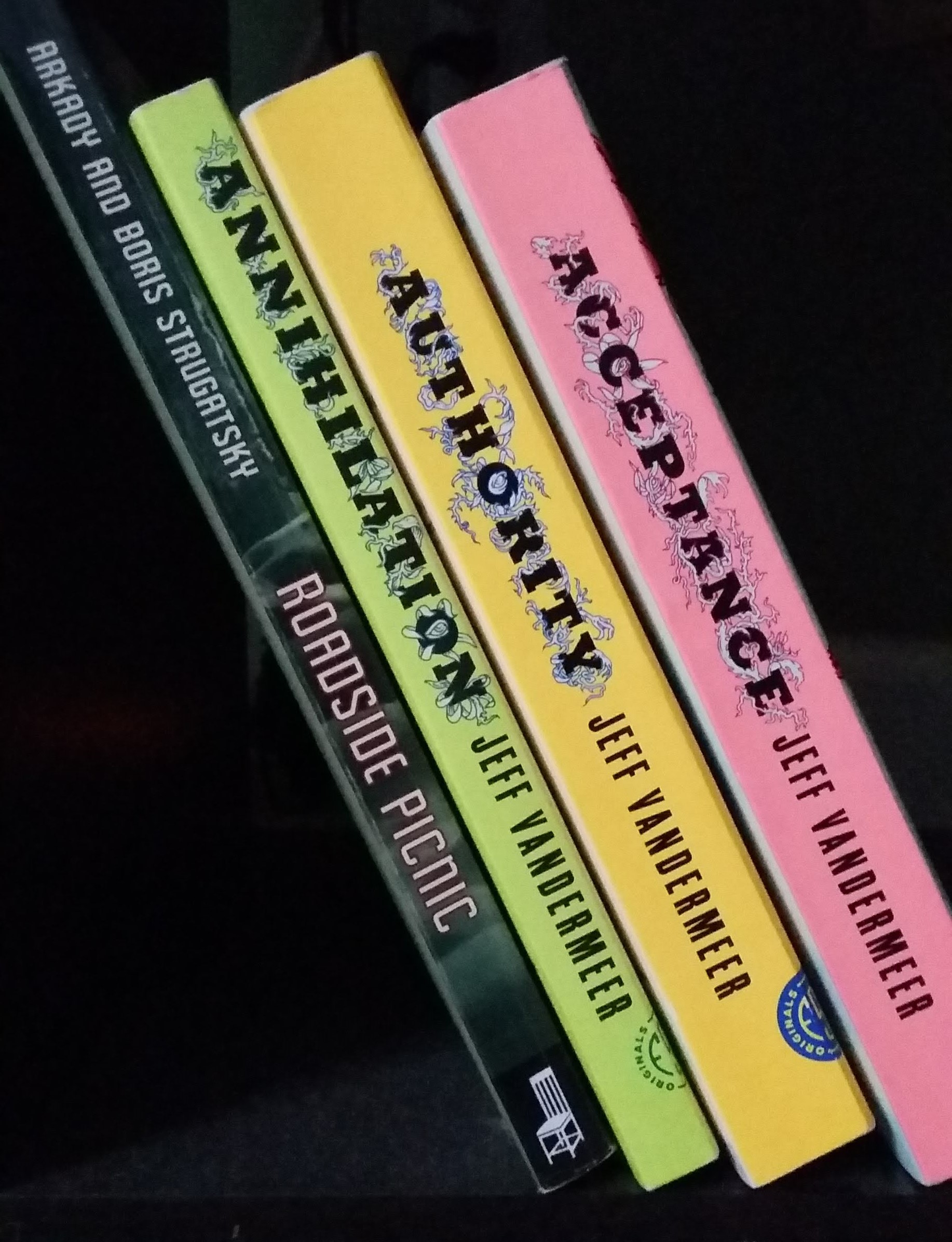 Yes I know, I slumped on reviewing April’s reads. (I did read during April!) It was a busy month at work, and I wasn’t as diligent about taking notes during my readings as I learned to be this past month, which turned out to be equally busy. June, however, will be still busier, so note-taking-while-reading will become twice as important.

As I told a friend, when I read, I want to lose myself in the story. Taking notes makes it harder to feel subsumed, although I did find that taking pictures while reading helped me “bookmark” interesting passages to come back to during blogging. There’s also a balance between reacting to a particular passage, vs. an entire scene, vs. a whole story.

In any case, this month I’m celebrating the acceptance of one of my favorite short stories to have written (“Liliya and the Lost Relics of Bygone Futures,” a Chernobyl-themed Baba Yaga retelling appearing in about a month in Soft Cartel) by exploring Area X and the Zone: the worlds of Jeff VanderMeer’s Southern Reach trilogy, and the Strugatsky brothers’ Roadside Picnic.

(In a pleasant surprise, I found that Roadside Picnic’s Zone had some wonderful parallels to Area X, although VanderMeer has said it wasn’t one of his influences; just a happy coincidence. This is especially interesting given that they were written 40 years apart, on nearly opposite sides of the globe, and in very different sociopolitical contexts.)

A confession: I actually started reading this trilogy quite awhile ago, but it took time to read in its entirety, and then to process what I read. (And no, I haven’t yet seen the movie.) Ultimately, the way I would describe it is:

This may not be horror in the classic sense, but VanderMeer’s deliberate writing delivers a sense of sustaining unease. In Annihilation, the biologist who will become known as “Ghost Bird” tells us, “Transformations were taking place here, and as much as I had felt part of a ‘natural’ landscape on my trek to the lighthouse, I could not deny that these habitats were transitional in a deeply unnatural way.”

There were thousands of ‘dead’ spaces like the lot I had observed, thousands of transitional environments that no one saw, that had been rendered invisible because they were not ‘of use.’ Anything could inhabit them for a time without anyone noticing. We had come to think of the border as this monolithic invisible wall, but if members of the eleventh expedition had been able to return without our noticing, couldn’t other things have already gotten through?

“Reality” is, after all, an illusion, “civilization” a thin veneer between us and the wild kingdom we assert dominion over. (Look at what happens when your house, along with your entire community, goes without power for longer than a few hours or an overnight.)

In fact, I first started to read Acceptance on a field trip to the coast with my son’s 5th grade class. The St. Christopher Camp & Conference Center’s Barrier Island Environmental Education Program is located in the “pristine wilderness” of (mostly) undeveloped land not far from Charleston. Its beaches, dunes, and especially its maritime forest stand in stark contrast to the overdeveloped hotels, rental properties, and condos that line much of South Carolina’s coast, and it becomes easy to recognize the criminal impact that development has had on coastal ecosystems.

Before I digress into a rant, however (reread last week’s blog on baby raccoon dystopia for that), a final observation: one of my favorite aspects of this trilogy is the way the characters never quite fit in. They aren’t wholly likeable, and it’s on that basis that they form their attachments to one another — and to the reader. “Likeable,” after all, isn’t the same as “relatable.” Like Ghost Bird, I am introverted and detach into clinical analysis in times of stress; like Control, I have at times been at the mercy of others’ agendas without knowing what they are.

In fact, it’s the characters’ inability to fit in with other humans that ultimately ensures their survival. The more they fight, try to impose their notions of the familiar onto the unfamiliar, the more likely they are to meet an unfortunate fate. Although some things should never be accepted as “normal” from a moral standpoint, other things — like nature — could stand to be a little more normalized. The Southern Reach trilogy is a good starting point for how.

The benefit of being open-minded about your sons’ videogaming habits is that sometimes you find that gem of a book on which the game was based. I enjoyed METRO 2033 for this reason, and had been looking forward to the Strugatsky classic on which both the Tarkovsky movie “Stalker” and the videogame S.T.A.L.K.E.R. were based.

The Strugatskys were ahead of their time. Not just because the Zone of their novel bears an eerie resemblance to the Chernobyl Zone of Alienation (or, for that matter, to the Area X in the Southern Reach trilogy), but also because:

Their depiction of a post-capitalist society is startlingly prescient

Reading this book on a business trip earlier in the month, I messaged this passage to my older son, in fact, with the note: “Why your generation is so attracted to the Zone” (a statement with which he heartily agreed):

Then he walked on the plush carpet along the hallway, which was bathed in the cozy light of hidden lamps. Here, it smelled like fancy tobacco, Parisian perfumes, gleaming leather wallets oversstuffed with banknotes, expensive call girls worth five hundred a night, and massive gold cigar caes. It stank of vulgarity, of the foul scum that had grown on the Zone, gotten rich by the Zone, fed, drank, and fattened from the Zone, and didn’t give a damn — and especially didn’t give a damn about what would happen when it gorged itself to its heart’s content, and all that used to be in the Zone settled in the outside world.

Still, main character Redrick Schuhart can’t bring himself to embrace others’ capitalist sensibilities; he’s in it for the love of discovery, a contrast to “how I’d come home strung out after work in a herd of like-minded drones, how I’d get squashed on all sides in their subway, how I’d become jaded and weary of life.”

The effects of the Zone extend beyond the economic

It’s not quite climate change, but for a story written forty years before climate change began to be discussed in earnest, it did make me raise an eyebrow:

The translated language is beautiful

The philosophizing for which Russian literature is known pithy and to the point:

(Not lost on me: the sentence that follows that thought: “A new breed of stalker has appeared — armed with technology.”)

And there are, of course, the parallels with Area X, between the normal-not-normal of it…

If you take a quick look at it, everything seems OK. The sun shines there just like it’s supposed to, and it seems as if nothing’s changed, as if everything’s the same as thirteen years ago…. Except there’s no one around: no one living, no one dead.

… and the transformations taking place among the people (and in this case, their progeny) who have been inside the Zone:

He’d been awakened, horror-struck, by the same sound, mournful and drawn out, as if from a dream. Except that it wasn’t a dream. It was the Monkey screaming, sitting on her bed by the window, and his father was responding from the other side of the house — very similarly, with creaky drawn-out cries, but with some kind of added gurgle. And they kept caling back and forth in the dark — it seemed to last a century, a hundred years, and another hundred years.

As much as I enjoyed the Strugatskys’ The Doomed City, I found Roadside Picnic to be just that little bit more accessible, even apart from its parallels, and more accessible also than the film “Stalker.” Like the Southern Reach trilogy, Roadside Picnic is about finding meaning outside of the trappings of human civilization — recovering our humanity in the face of alien influence.

What are your favorite books about the weird and wonderful?