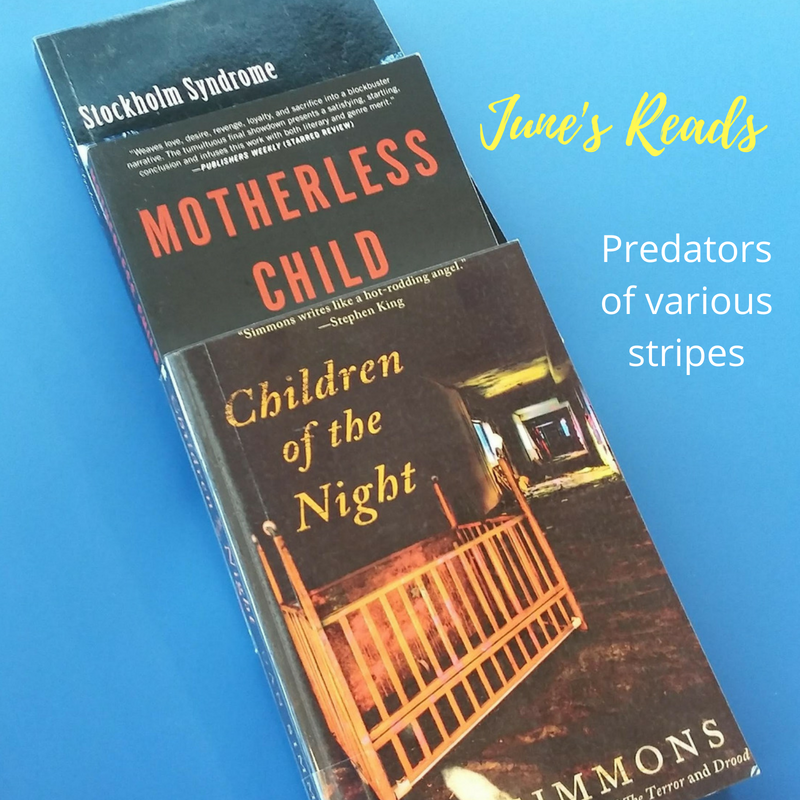 I admit: I struggled a bit this month. I broke my policy of being very picky about what I read, in the spirit of supporting other indie authors and booksellers… and ended up with a book I couldn’t finish. This is rare for me! Normally I really need to know what happens, but in this case, the author focused so much on (hyperbolic) descriptors that the story got absolutely lost. Pages of absolutely nothing happened, so I couldn’t make myself care.

Worse is the effect this had on the rest of my reading. I have this huge TBR pile and couldn’t make myself interested, no matter how many good things I’d heard about the authors. (Note: I’m over it, and into July’s reads now!)

June’s reads therefore reflect a book I actually read but never reviewed back in April, because it just seems to fit better here. Onward:

I enjoyed this unusual vampire story for its atypical boy-meets-girl story, as well as its atypical setting: coastal North Carolina. If anything, in fact, it’s a vampire #metoo story — told from the point of view of a woman, Natalie, “made” basically because a male vampire felt entitled to her.

The real strength of Motherless Child is the friendship between the two newly vampirized women, a deep and complex relationship that sees them transform in more ways than just from human to vampire. As with any major life (or undeath) change, they learn things about one another — and themselves — that wouldn’t have otherwise come out. Their new situation twists and amplifies these discoveries in sometimes unsettling ways, leading ultimately to the self-awareness they need to confront their nemeses.

If there’s any weakness, it’s in the underdeveloped characters of the Whistler and his Mother. This makes sense for the Whistler, who comes across as immature; less sense for Mother, a black woman without much of a human history (conveniently, she doesn’t care anymore — a missed opportunity to explore how her past might have informed her present, in particular the Whistler subverting his relationship with her in favor of a white woman).

Most of the book’s conflict lies in flight and pursuit: the women running — even as Sophie wants to return to her son — the vampires pursuing, and ultimately, a reversal as vampires the Whistler and his Mother figure out how to draw the women rather than simply chase them.

Motherless Child is part of a trilogy, and while I felt somewhat disappointed by the ending, I’m hoping that the coming books in the series redeem it. I like Hirshberg’s writing (his short story “Mr. Dark’s Carnival” gave me chills) enough to want to follow through, and even look forward to finding out more.

Children of the Night (Dan Simmons)

This second vampire story of the month also has an unusual setting: post-revolutionary Romania, both urban and rural. Simmons’ description of the brutality of the Ceaucescu regime — a sociopolitical form of vampirism — and its aftermath is done in a way you don’t often see in literature. It’s clear that Simmons was deeply moved by his time in the country, and from that standpoint it’s worth the read.

Reading Children of the Night, I couldn’t help but wonder whether this 2012 book was inspired by The Strain trilogy, the first book of which was published in 2009. A lot of the elements are similar: a vast, Illuminati-type conspiracy of very powerful people — strigoi — and a focus on the science of vampirism. This book’s science is grounded in genetics and hematology, not epidemiology, but it represented a welcome change from more typical vampire fiction.

All that said, I couldn’t say I loved Children. It was a bit too plot-driven and heavy on “tells” (versus “shows”) for my personal taste, and I found the climax implausible and the action scenes difficult to follow. While the writing kept me reading and eager to find out what happened next, I found myself wanting to get to know the characters better for themselves.

This was particularly true of Kate, the POV character. It’s not good when the secondary characters feel more interesting than the POV character, though I have to wonder how much of this was a function of a man trying to write from a woman’s POV; a man trying to write for other men may not feel it necessary to make a woman character relatable, missing the point that plenty of women like horror, science, and suspense too.

Heather is a fellow indie published author, also based in Greenville, whom I met at a recent indie author book market. We got to talking and her description of her book piqued my interest.

Stockholm Syndrome’s strongest point is the way it nails narcissistic abuse, right down to the things abusers say to keep you “on their side” and prevent your forming opinions of your own. The literal prison two characters find themselves in is a good metaphor for any relationship with a narcissist; played off against each other and malnourished, they have to learn to rely on each other if they’re to survive.

From this standpoint, the story could be triggering… but I found it satisfying and even healing to witness the different characters slowly awaken to what’s going on.

Stockholm Syndrome is well-paced and suspenseful, but its one weakness is that it could have used some improvement on the technical side to deepen what could be a compelling character-driven story. Technical issues like “head-hopping” — a switch from one person’s POV to another’s within the same scene — has the effect of emotionally distancing the reader from the character you expected to get to know a little better.

This doesn’t work for a story that depends on psychology. I’m a big fan of Tana French exactly because she delves into her characters’ heads in such a real and immediate way. You can’t help but relate to them, even if you disagree with their choices. In Stockholm Syndrome, as well paced as it is, some of the characters’ decisions driving towards the climax — meant to build suspense, such as a nap taken right before the big reveal — don’t ring true as a result of that emotional distance.

Again, overall this was a good read; with refinement of the technical side of writing, Stockholm Syndrome would go from good to great.

What have you read this past month?

One thought on “June’s reads: Predators of various stripes”