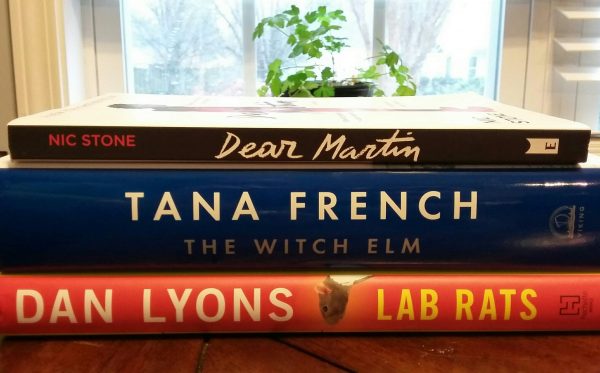 The books I read last month were notable not only for themselves, but also for the fact that I read them just following a layoff — from the same authors, and in the same order, that I read the first time I was laid off two and a half years ago. I’m tempted to say that such a spooky mirror-image coincidence is a sign that perhaps I shouldn’t purchase books by these authors in tandem!

I’m kidding, of course. I enjoy them both, and I’ll purchase what I want, when I want… when I have a steady paycheck, that is! Meanwhile, here are my takeaways from January’s reads:

Its eye-catching subtitle, “How Silicon Valley Made Work Miserable for the Rest of Us,” would have caught my eye even if hadn’t already read Lyons’ 2016 Disrupted.

Lab Rats is the book that Disrupted probably should have been. Perhaps overly focused on the callousness of the “business decision” when it comes to human beings, Disrupted seemed like little more than an angry reflection of the author’s wounds over his own layoffs, disguised as satire.

What it did do well was to start to explore the toxicity that’s all too common in tech and startup culture — a process which Lab Rats completes. It’s the much more objective progression in Lyons’ mindset, eviscerating “management science,” Agile software development, and the new oligarchs of tech, before covering what Lyons calls “four factors of workplace despair”: wage instability, job insecurity, change for change’s sake, and dehumanization, all of which contribute to “unpredictable chronic mild stress.”

This book is much more a piece of journalism, in other words, than Disrupted was. At the same time, Lyons’ research at times seem more anecdotal than definitive, shoring up his viewpoint without necessarily testing it. Also disappointingly, he stops well short of advocating for new-style labor unions that aim to reposition workers as more than simple “human capital.” As I wrote on Goodreads:

Lyons leaves the bulk of solution-making up to good-hearted capitalists who choose to set a more responsible, humane course. Humanity doesn’t scale, though, and since the nature of business is growth, relying on smaller firms to do the right thing doesn’t seem sustainable relative to a strong base of well-organized workers.

“Still,” I added, “read this book for an unflinching examination of the modern working world, and use its insights to spur action.” If that happens to include organizing? Well, let me know, and I’ll give you a signal boost.

Reading 2016’s The Trespasser, I had the sense that French was dialing it in a bit, ready to move on from the Dublin Murder Squad to an entirely new project. That project is The Witch Elm, still a police procedural, but told this time from the victim’s point of view.

It’s easy to see why French wanted to move on. In a sense, she’s returning to the roots she established in her first few novels:

I wrote on Goodreads:

I found this story to be a refreshing change of perspective to the point of view of the subject of investigation (not the investigators’) and caught elements of her previous novels in this – notably her first three. Although I thought the “whodunnit” was fairly easy to guess this time, the twists lie in the “how do they get out of it?” leading to a satisfying, if somewhat cynical, conclusion.

I am, if nothing else, a “late to the party” consumer of many, many media. I watched “Stranger Things” and “The Haunting of Hill House” months after everyone else on Twitter watched and raved about them (and I never did watch “Breaking Bad”).

I likewise only managed to read Angie Thomas’ The Hate U Give 4 months after its February 2017 release. Somehow, Nic Stone’s Dear Martin, released in October 2017, remained on my TBR pile until, well, Dr. Martin Luther King Jr.’s birthday… this year.

Dear Martin is a very different book compared to THUG, much more of a “quick hit” than a deep dive — but no less impactful. Where it shines brightest is in showing protagonist Justyce with all the vulnerability and anxiety of any teenage boy — spend time with any youth, listening to them and letting them talk, and you know what I mean.

I wrote on Goodreads:

This vulnerability underpins many of the choices Justyce has to make, highlighting how important it is for youth to have access to the people and environments that help route them towards the right choices — and for white people to recognize the odds and the ways in which we contribute to them.

I wrapped up the month by completing a series of “freebie” short e-books available from horror press Crystal Lake Publishing. Designed to be “hooks” to longer works and series available from Crystal Lake, I found these to be nonetheless a mixed bag of writing styles. My personal favorites:

The remainder of entries are somewhat uneven, ranging from a Lovecraftian adult horrorfest (which relies on some pretty obnoxious stereotypes), to a young-adult werewolf whodunnit, to a fairly predictable psychological horror story, to a sneak peek of a forthcoming work. For freebies, these are worth the download, and they did introduce me to authors I’d like to read more of, so I guess they did the job!

What did you read in January, and what are you reading now?

2 thoughts on “January’s reads: What goes around, comes around”