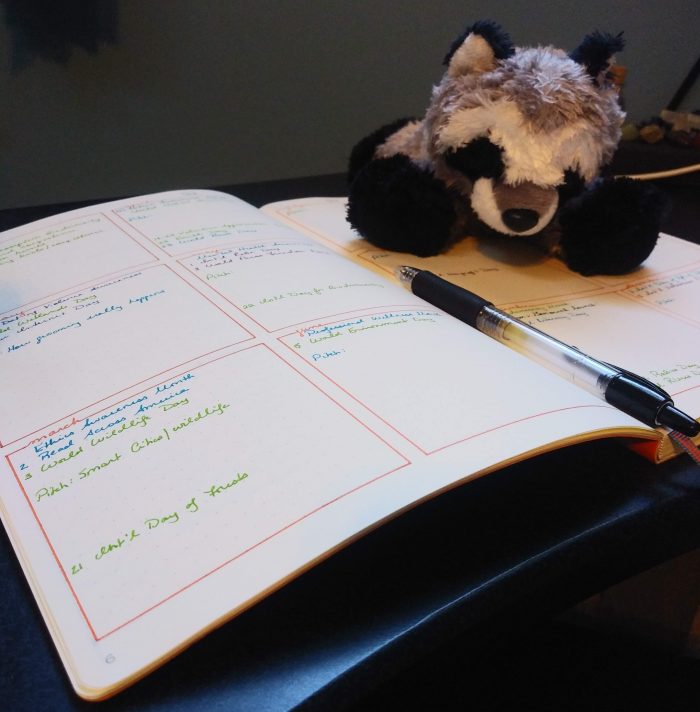 Heading into 2020, I have a lot going on: continued efforts in journalism, plus launching two fiction books, plus volunteer activities.

It’s enough to make me, well, a little nervous. For two reasons:

Another wrinkle: my daily schedule

One thing I haven’t talked too much about — in part because I hoped it would be short-term, and in part because it sounds like “bad choices” — is my daily schedule for the past year, and for the foreseeable future.

In short: we’re a one-car family, and I drive. A lot. Probably 3-4 hours per day. This used to fall to my husband, but when I lost my job, he managed to find one (with benefits!) and now my schedule works more or less around his.

I happen to enjoy driving, and I like that it gives me time with my husband that we wouldn’t otherwise get. But the way my day is broken up means it can be difficult to get in a “zone.” Because my executive dysfunction means it’s harder for me to prioritize tasks, I’ve often found myself in one of two states: clueless as to what to do next unless there’s a clear, pressing priority; or overwhelmed with too much to do, unable to filter.

You would think the answer is a good to-do list, and maybe for some people it is, but for me it can add a layer of executive dysfunction to what I’m already dealing with. Sometimes I’m afraid of confronting what I haven’t accomplished. Other times I’m simply not in a “planning” frame of mind; I’d rather be writing, hiking or reading. And still other times, my all-or-nothing brain chemistry wants to do all the planning in a single fell, one-and-done swoop.

Rethinking time and how I spend it

I have a poor time sense, and I often estimate that I can do about twice as much as I can actually handle. I tend to plan as if I were going to be in a constant state of hyperfocus, when reality is that I don’t spend as much time there as I’d like. (I’m also not convinced it would be healthy.)

So, I’m trying to learn how to think about time differently — to view it, paradoxically, as abundant rather than scarce. That’s a key tenet, if not the whole point, of Off the Clock by Laura Vanderkam.

I blogged last year about how my reflective practice journal helps me manage my life. Off the Clock recommends logging how you spend your time in half-hour increments, but I don’t work this way (I’d have to log five-minute increments, and drive myself crazy!).

Instead, I’m working on taking a page out of meditation’s book, and simply noticing what’s going on long enough to record it. To that end, I took my reflective practice a step further this year by investing in a couple of bullet journals:

Finding my own path to planning, then, isn’t so much setting down in stone what needs to happen on a given day, as more starting with a goal (and preferably, an end date) and working backwards from there:

Finally, part of my planning is to learn to be more realistic about what I think I can achieve, and not hedge that I’m doing “stretch goals.” Besides…

There’s another reason I’m recasting my approach to planning: life always gets in the way. This week, my husband had to go to work several hours early on two days. That left me with a bigger midday chunk of time, but also more driving, and no “creative” time in the early mornings.

My mind was also chewing on a new project, which by Friday, coalesced into a potential book idea. That’s as far as I’ll talk about that, but the prospect is very exciting.

I could easily have beaten myself up for going so far off track so soon in the new year. Reflective practice, though, had me recognizing that schedule changes really do affect my executive functioning; that my interest-based nervous system had latched onto a new project purely for the dopamine hit; and that as my mind adjusted, the new project didn’t really threaten to derail my plans any more than it might have in years past.

In short: my planning for the coming year is paying off. Maybe not in ways I would’ve thought, but if it keeps me centered and grounded in my sense of my own purpose, optimistic that I can do all I’ve set out to do, then it’s doing its job — and so am I.

What’s on your to-do list for the year, and how are you planning to accomplish it? Leave me a comment!